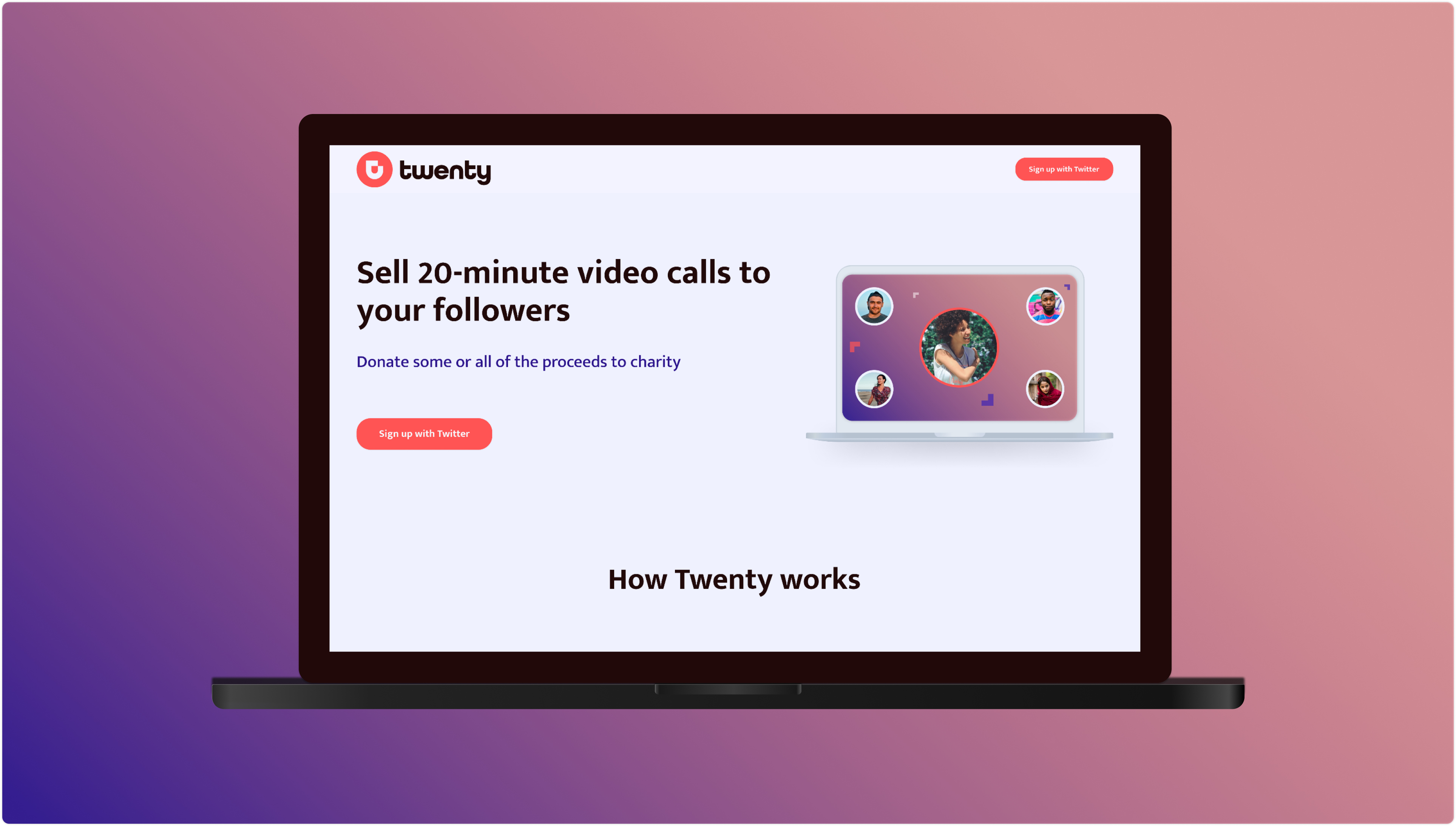 I am working with a private client to design Twenty, a web app that allows Twitter influencers to connect with their followers through 20-minute video calls. Users can purchase calls through fixed price sales or raffles, and influencers have the option of donating proceeds to the charity of their choice.

I wanted to find an efficient way for influencers to connect to their followers through one-on-one video calls.

Challenges and takeaways: These interviews revealed how key the emotional experience is, both for buyers and influencers. This is not just a simple translation, but rather a way for people on both sides of the call to form a connection and exchange ideas, however short the call may be.

I created two separate personas to distill my research on buyers and influencers.

Influencers need an app that will allow them to make a meaningful connection with members their fanbase while feeling that their time is being used well.

Buyers need an app that will allow them to both solve specific problems while allowing for a meaningful connection with influencers.

Challenges and takeaways: Since the emotional/intellectual experience is so key, I tried to flesh out my insights into thoughtful needs and behavioral considerations.

After my research stage, I communicated my findings to the client and got a better sense of the key features we wanted to focus on in the next stage. I put together a feature road map, site map, and user flows. From there I moved from low to high-fidelity mockups. ‍‍

Challenges and takeaways: Since the client was eager to build an MVP, we decided that it would be better to first gear the app towards influencers to test out its viability. We decided to table a more buyer-driven user experience and come back to it at a later date. It was also important to make the user experience for influencers as lightweight and efficient as possible as I learned that time constraints are a big blocker for them.

Challenges and takeaways: ‍When I’ve previously designed end-to-end apps, I’ve also done the branding myself. Since the client had previously collaborated with a branding firm, I had to work within some of the visual constraints they had created. It was an interesting challenge to unite my vision of the product with the existent branding, making sure the final vision was cohesive and in keeping with the core of the intended experience. Similarly, the client let me know early on that he would be building the site using Tailwind CSS. I decided to use the Tailwind UI Kit to make the eventual development process as seamless as possible.

I especially enjoyed working on this project as it gave me insight into the world of Twitter tech influencers—one that I previously had no knowledge of. Through conducting interviews, I gained insight into a world that I thought was very separate from my own, but it was encouraging to see just how willing many people were to talk to me and expressed genuine excitement at discussing Twenty. As someone who works in tech, this sort of experience was encouraging.

I also really enjoyed working with this particular stakeholder because he is also the engineer building the app. We were able to tackle many technical considerations from the very beginning, which made for a very smooth process with no surprises at the end when I turned over designs.

In terms of next steps, we are considering adding the following features in the next iteration of the app:

Feel free to reach out.